This makes the company one of the 5 winners in Baden-Württemberg to have won this award. A total of over 4,600 medium-sized companies were nominated throughout Germany.

The "Grand Prix of Medium-Sized Businesses" is one of the most prestigious business awards in all of Germany, and was held this year for the 27th time by the Oskar Patzelt Foundation.

Under the motto "Now more than ever", the companies are not only measured by economic key figures, but viewed as a whole. The creation of jobs and apprenticeships, as well as social commitment in the region and society, play a major part even in times of corona.

On behalf of the company and the entire staff, RSG owner and managing director Dr. Andreas Ecker thanks Mrs. Petra Hetzel of the BVMV, the Federal Association of Medium-sized Businesses, Entrepreneur Association of Germany e.V., who had nominated RSG at the Oskar Patzelt Foundation.

Mr. Ecker commented: “We are very proud that we could convince the jury of our company. The award is a great honor for us, and confirms that we are on the right track with our decisions. We will continue this with motivation and sustainability.”

RSG Automation Technics is the world market leader of customized special facilities for fully or semi-automatic processing of narrowband textiles.

In 2020 alone, RSG doubled the size of the company and 15 new jobs were created at the Bietigheim site.  Since 2021, RSG also provides training in various professions. 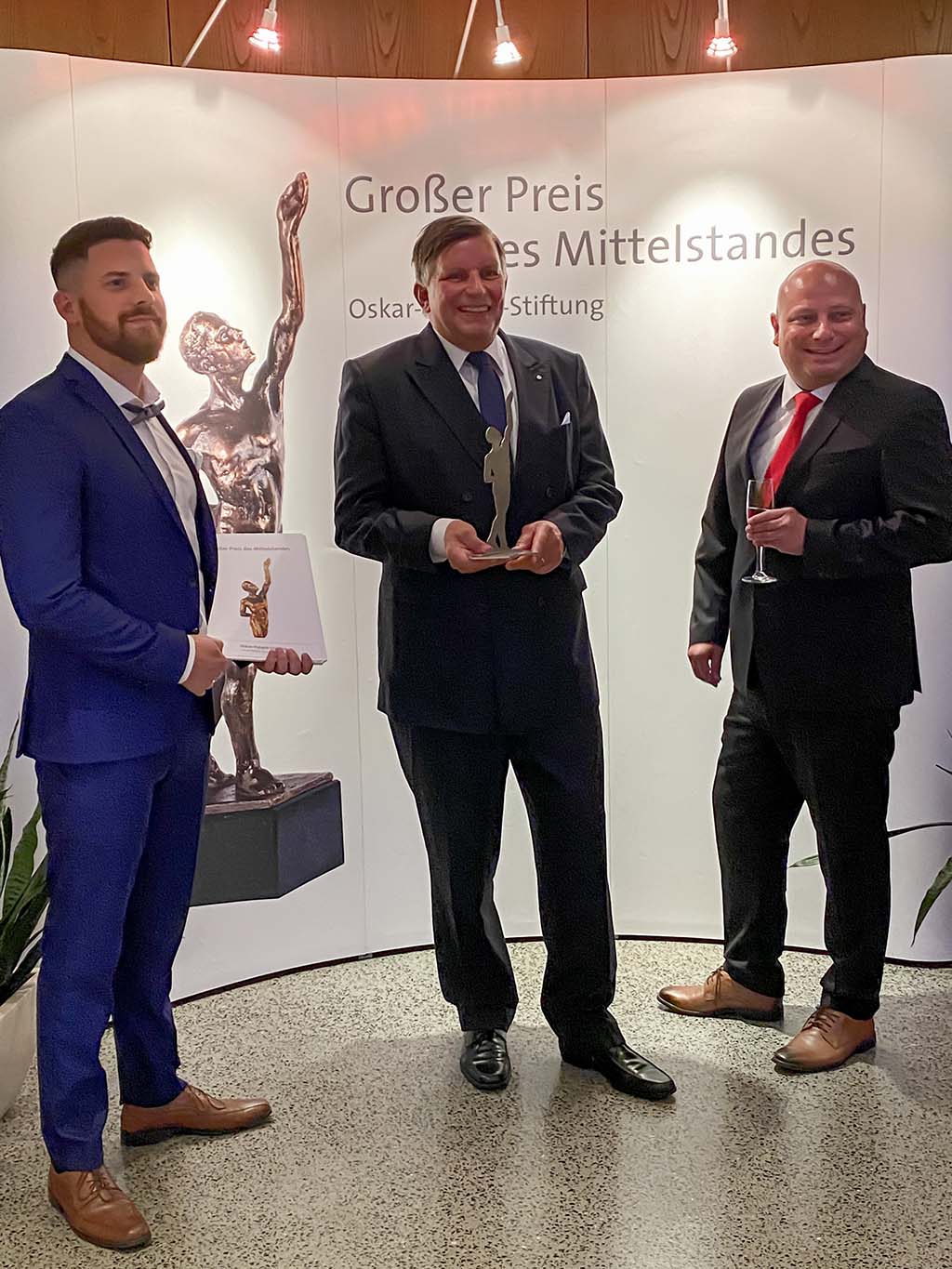 The family-run, traditional company, founded almost 40 years ago, has been working for years to ensure that the processing of textile products is increasingly taking place again in Europe and other high-wage countries. The machines of RSG offer solutions for effective and sustainable production even at sites with high labor costs.

With these innovative systems and production lines, products such as car and aircraft safety belts, airbags, lifting and lashing straps, hook and loop materials, and medical textiles can be processed and assembled fully automatically.

Nobody is forgotten during these times

Children and young people at the SV Leonberg/Eltingen are presented with a fan scarf for their loyalty to the club.

Unfortunately, “the ball rests“ for kids and young people, but of course also for all others active at the SV Leonberg/ Eltingen, due to corona since the end of October 2020. The traditional end-of-year celebrations were suspended, as well as all other sports, social and school contacts.

Since the club wanted to nevertheless provide a little pleasure, above all to the kids in these not so easy times, the idea of a “SV Leonberg/Eltingen fan scarf“ was put into practice, and was made exclusively available free of charge to the children, their coaches and active members. With this we wanted to send a signal to the kickers that we have not forgotten them, and that we are looking forward to seeing them back on the field soon.

The idea is the brainchild of Alexander Roehrle (team coach and marketing manager of the youth department) and Maik Eisenhardt, both from Eltingen. Mr. Eisenhardt works as a sales manager for RSG Automation Technics, a company for fully automated processing of narrow fabrics.
This made it easy for him to contact a manufacturer of high-quality fan scarves, who professionally designed and manu-factured the scarves. 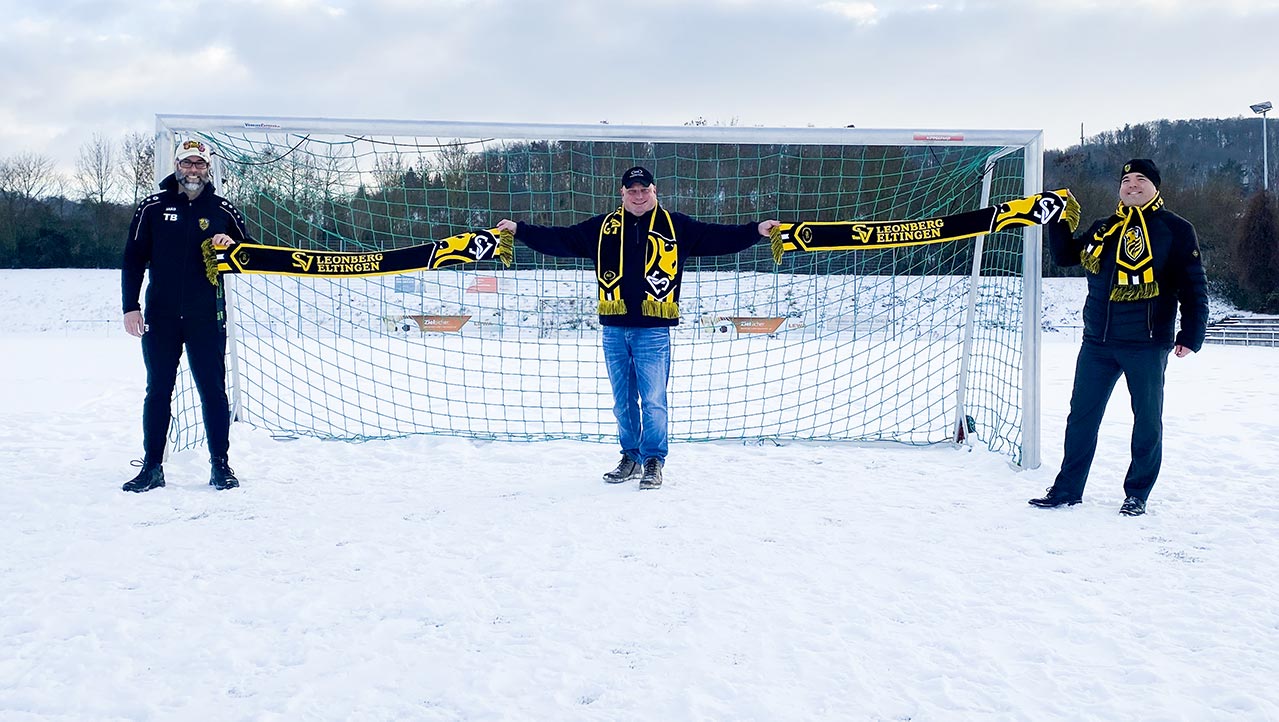 RSG supported this initiative financially, and a total of 700 scarves were made. In the meantime, they were “officially handed over to the SV.
The scarves were given out first to the kids, who were extremely happy about them. More and more children and young people can be seen walking through the city with “their“ scarves.
With these scarves we try to give the players some sense of togetherness, and we are very much looking forward to the upcoming games of our many youth teams and all other active players, when it is finally time to start out again on the field“, comments the club.

We are proud and honored. Three times in a row nominated for the Final round for special achievements of middle-sized companies in Germany. 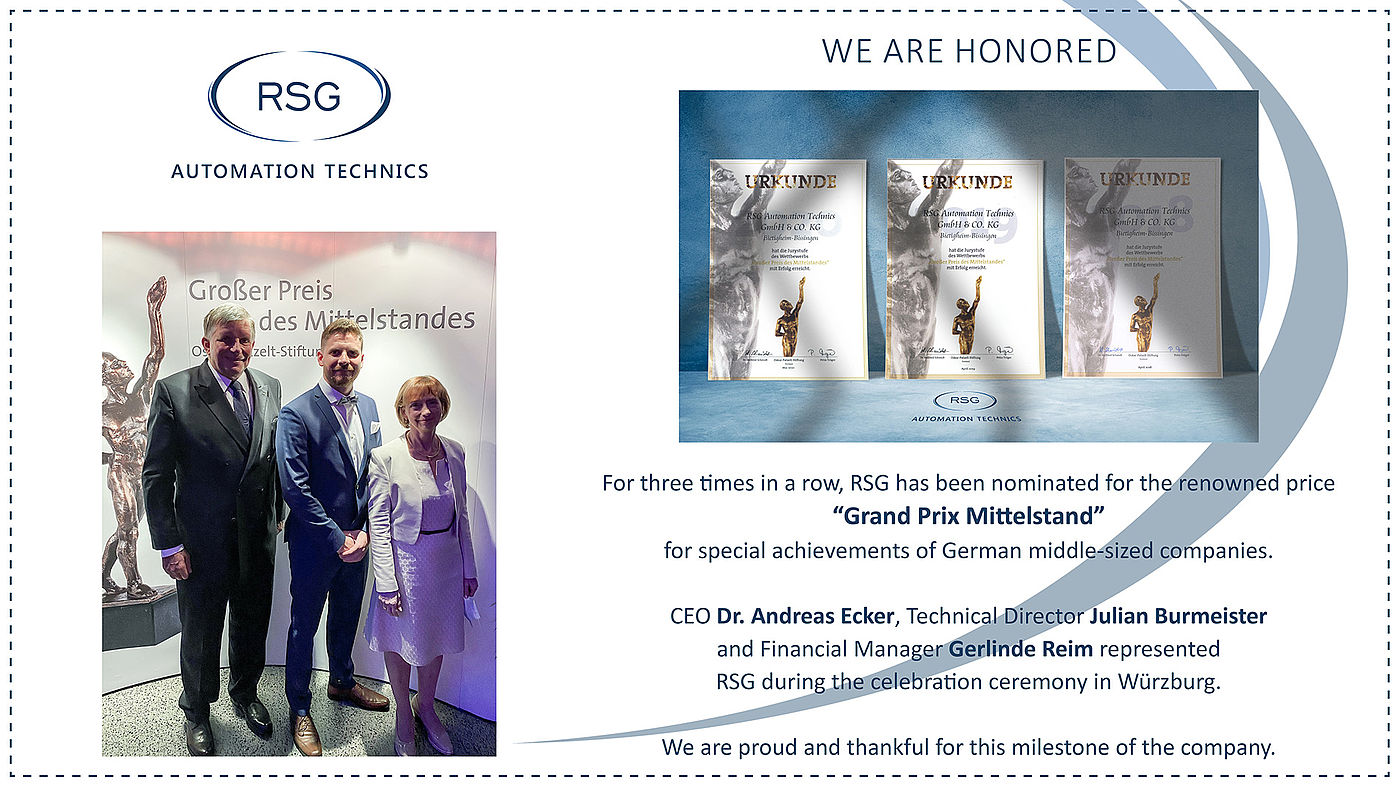 BIETIGHEIM-BISSINGEN. The walls in the building of the Bietigheim-based company RSG Automation Technics have recently been reduced by one.  It had to be removed, because more space is needed for facilities and production lines, which are being built in the company.
Production at RSG Automation is running at full speed: “We are flooded with orders at present,” said marketing and sales director Maik Eisenhardt. This statement can also be translated into numbers: “For this year, we are expecting a sales growth of about 100 percent,” reported managing director Andreas Ecker, “the orders are already in”. And in the coming weeks, there will be incoming orders accounting to a volume of more than 4 to 5 million euros. Those are orders already for 2021, despite the corona crisis: “So far, we have not had a single cancellation,” said Eisenhardt of the past weeks. “Surprisingly, the currently crisis-ridden sectors of the automotive and aviation industries are the ones actually investing in RSG systems,” said Eisenhardt. These companies want to lay the foundations for the post-crisis period now, so that they can then use new RSG machines to manufacture their products “faster, more efficiently, and more cost-effectively than their competitors”.
Establishment in the USA with the help of YouTube
According to Andreas Ecker, the rapid growth of RSG has to do with the fact that the company has been able to gain a foothold over the past 5 years in the USA – above all with the company's own YouTube site, through which the company generates many orders also overseas. Because US president Donald Trump has decreed that companies should produce less in China and more in their own country, US companies should now automate their production more – and therefore order machinery in Europe and Germany, i.e. where system engineering is more highly developed and complex than in the USA.
At RSG, production employees are currently working on twelve machines, all of which are to be delivered to North America. Many facilities go from Bietigheim also to Mexico, South America, and traditionally, to other European countries. According to Eisenhardt, orders came in from Switzerland, Poland, Sweden, Germany, Portugal, and Great Britain in the weeks of the corona crisis.
Recently, there have been specific inquiries also from Italy – companies which, as other European companies, will have reconsidered during the corona crisis: away from textile production in low-wage countries, away from the risk of global supply chains collapsing in a crisis like the present one, away from a dependence on the Asian market, and towards stronger local and regional production in Europe and in Germany. “Globalization cannot mean that everyone gets everything from China,” emphasized Ecker.
At present, there are many inquiries from the southwest for systems that make medical products, e.g. for hospitals and medical practices. Eisenhardt described the trend from which RSG benefits as: “These urgently needed products are to be manufactured locally and independently again”. According to the sales director, a Baden-Württemberg-based manufacturer of medical products has recently placed a major order. The customer hopes to use the requested system to meet the increased demand for its products during the corona pandemic. 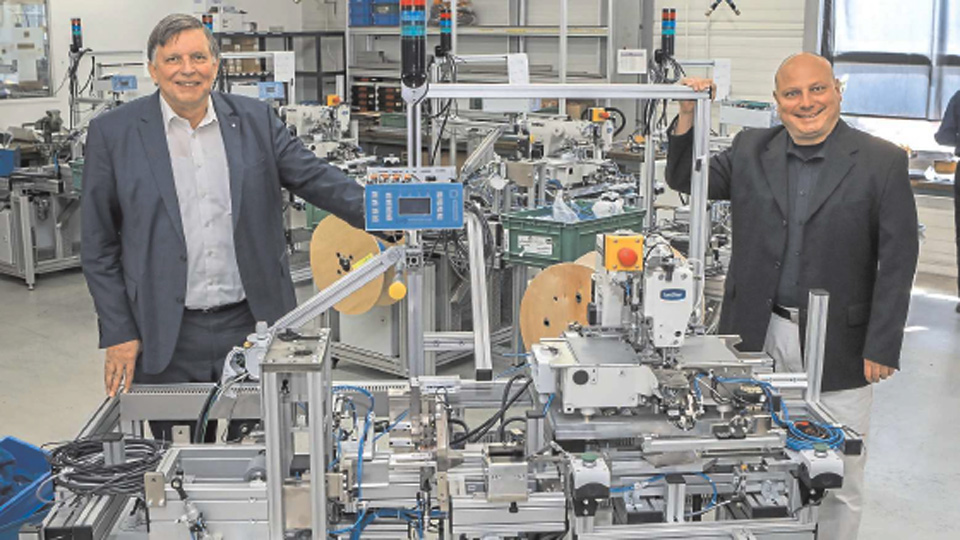 But automation also replaces manual work. Ecker replied in return that it also creates jobs – namely by using machines to keep production in the country rather than (no longer) moving it to low-cost foreign countries.
RSG is located in the Bietigheim industrial park, overshadowed by the huge Olymp building, but as small as the headquarters of the special machine engineering enterprise may seem, the larger is the range of its products. “95 percent of all aircraft seat belt systems worldwide are produced by our machines,” said Eisenhardt. In Europe, about 70 percent of the car seat belt system production is done with RSG machines.
Last year, RSG delivered the first machine for the production of airbag restraining belts – with an integrated six-axis robot that feeds the system with fitting parts. The Bietigheim-based company recently entered the construction of systems for the production of medical textiles, such as blood wipes used during surgeries. RSG facilities are also utilized to produce lashing and retaining strap systems, for instance to secure loads.
Business is going so well for the company that there are ten more people employed than at Christmas in 2019; and now, in the middle of the crisis, three more are being sought, for example for the construction and mechatronics departments.

Foundation almost 40 years ago in Ludwigsburg-Poppenweiler

In 1983, the company Näh-Systeme Rombold was founded in Ludwigsburg-Poppenweiler, which manufactured label dispensers for the clothing industry. From 1996 onwards, focus was on industrial automation of production processes, and since 2004 on individual steps in the production of seat belts. One year later, Andreas Ecker took over the company, which moved to Bietigheim-Bissingen in 2011 and changed its name to RSG Automation Technics. It also builds machines for special medical products and the airbag industry. RSG has 25 employees and expects a sales total of more than five million euros in 2020. In 2018, Focus magazine designated RSG as the "growth champion", because the Bietigheim-based company was able to increase its sales by 30 percent. It took first place among German textile machinery manufacturers.

For the owner, Dr. Andreas Ecker, it is a matter of importance to support young people on their way into the working world and actively promotes this with 2 projects:

Educational partner at the Robert-Bosch-Gymnasium in Wendlingen
Since November 2008 there has been an agreement between the state government and representatives of the business community on educational partnerships between schools and companies. The Robert-Bosch-Gymnasium works together with various partners and institutions to link school and society more closely and to prepare students even better for their future careers. 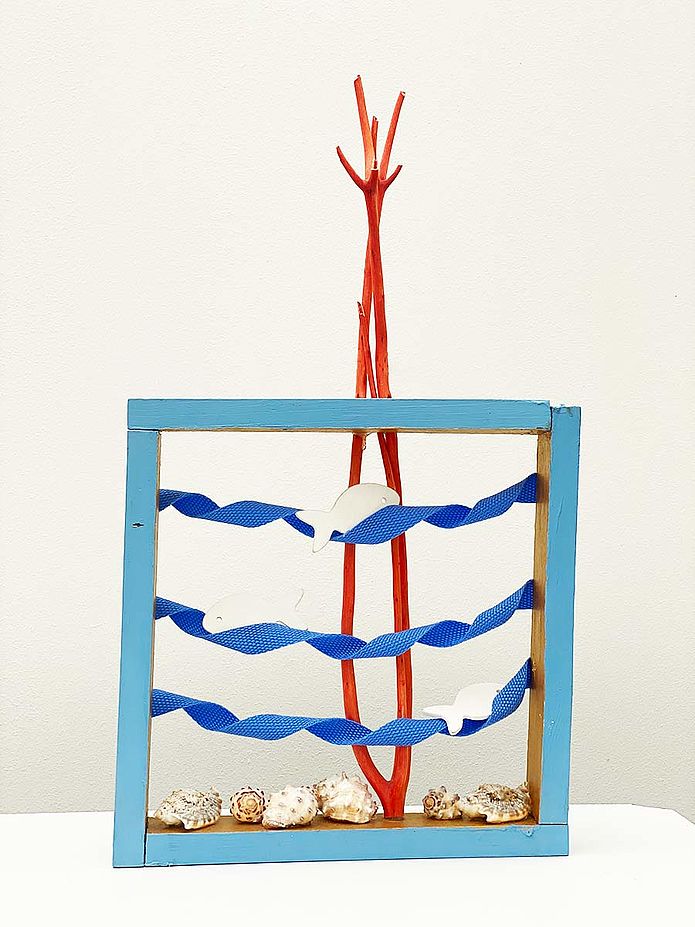 RSG has recently become a new partner in this project. Dr. Ecker sees this cooperation as an opportunity to bring the meaning of automation and economic efficiency closer to 10th grade students. As part of the teaching unit "Natural Science and Technology (NWT)", it is planned to introduce students to industrial automation and calculation of the economic efficiency of the intended measures using the example of belt and strap manufacturing. During a visit to the company, students can learn about different automation solutions. 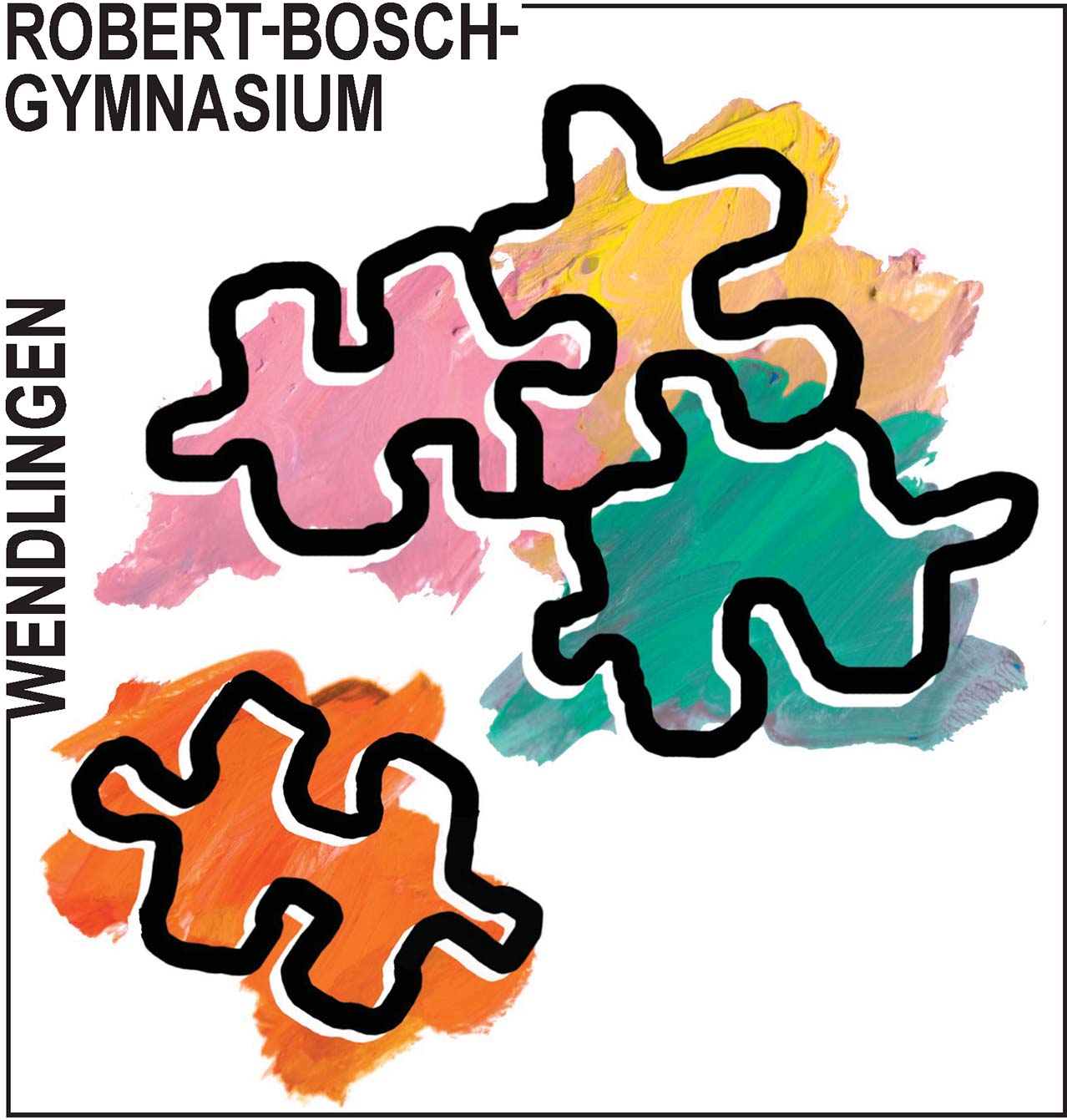 Support of students in art lessons at the Edith-Stein-Realschule in Speyer
Here, artistic encouragement is being done by using belts and straps, which are processed in a fully automated way on the machines and facilities of RSG.  Children create in their art lessons small aquariums or landscapes with the colored textile left-over materials. In doing so, it is an important aspect to make children aware that textiles are not only "clothing", but play an important part in many other areas of our lives.

For a long time now, RSG Automation Technics, based in Bietigheim-Bissingen near Stuttgart, has established itself internationally as a world-leader for special facilities in the field of of fully or semi-automated processing of narrow band textiles.

This was impressively proven:
The recognized and renown business journal “FOCUS Business” determined the top 500 from a database of 3.6 million German companies, which were able to establish the highest increase in sales in the years 2013 to 2016.

With an increase in sales of 30%, RSG is on first place among German textile machine manufacturers.

Among all German machine and facility manufacturers RSG is on an outstanding 15th place, and is on place 378 Germany-wide. For this RSG was now awarded to be “growth champion 2018” by FOCUS Business.

“This historic success is of course a milestone for our company and all employees. Therefore, our special thanks go, of course, to our customers for their long years of trust”, comments managing director Dr. Andreas Ecker proudly, and sales director Maik Eisenhardt is happy “that the innovative steps of the last years were confirmed by this success. The task now is to build upon this, and to continue to internationally strengthen the RSG brand.”

to the news archive